A RESTAURANT THAT ALREADY HAS ITS OWN HISTORY...

Fruit of a great friendship and mutual admiration between President Yoneichi Otani and Claude Terrail, La Tour d’Argent Tokyo opened on 4th September 1984. It was the first French fine dining restaurant in Japan and is today the only one that has survived that long. When it opened, Claude Terrail appointed Christian Bollard to head up the sumptuous replica of the Paris restaurant. He is still Managing Director to this day, masterfully running this prestigious establishment, which looks over New Otani Hotel's Japanese gardens. The current chef is Renaud Augier. 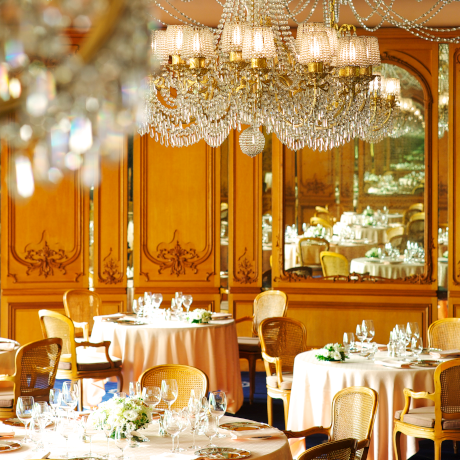 Transcending trends and crises, La Tour d'Argent Tokyo has built up its reputation and clientele and, during a magnificent event in September 2004, celebrated the 20th anniversary of its establishment and its friendship with Japan.

La Tour d’Argent de Tokyo is the first restaurant to have imported duck, to have served lobster and asparagus in Japan, and to have introduced tiered cakes for weddings, previously completely unknown in the country. La Tour d’Argent at the New Otani Hotel has the honour of being the restaurant team chosen by the Japanese Imperial family for some of their receptions. The whole team discreetly moves to the Imperial Palace and is unable to breathe even the slightest detail about their trip.

He joined the Tokyo restaurant in 1983 in order to manage the project that Claude Terrail had entrusted to him: to create, in the New Otani Hotel, the only Tour d'Argent restaurant outside of France. Since 1984, the year the restaurant opened, he has collaborated with many French and Japanese people with whom each evening he stages and hosts the art of good living, for which France is renowned throughout the world. A guardian of tradition, he is the defender of the Tour d'Argent spirit and its demand for excellence.

Starting his cooking career aged 16, he learned his trade from Georges Blanc, Michel Trama and Alain Ducasse. Crowned Meilleur Ouvrier de France (Best French Craftsman) in 2018, Renaud Augier proudly expressed: “with this tricolour stripe on the collar of my outfit, I wear the colours of my country in a foreign land”.

Open every day for dinner, except Monday. First service at 5:30 pm